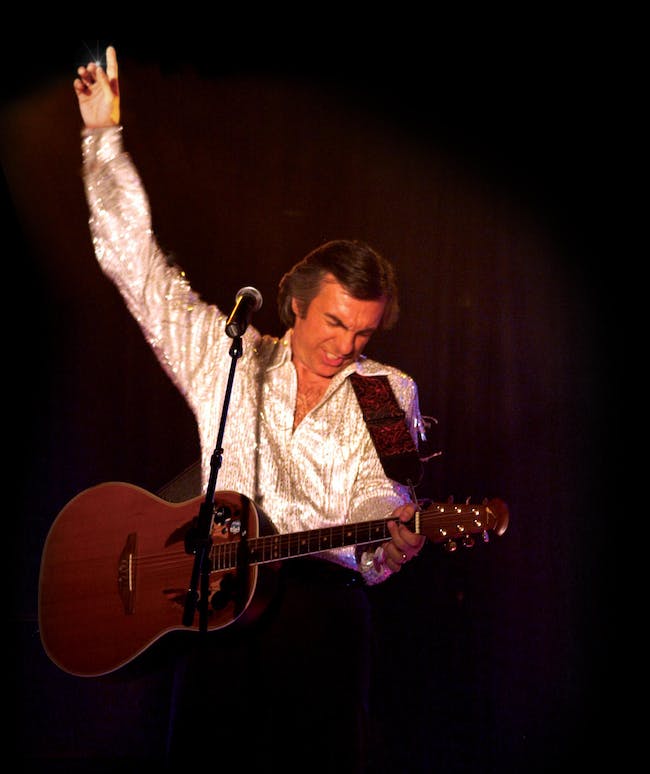 Each expression of every Neil Diamond song by Jay White evokes the power and the passion of the American musical icon. For over 25 years Jay White has performed all over the world, while reflecting the stage persona of this Rock & Roll Hall of Fame Legend. Validation came from 2002 -‘10, as a Las Vegas Riviera Showroom headliner, sparking national interest and recognition. In 2008 Jay was cast by Director Ron Howard to play Neil Diamond in the Academy Award Nominated film “Frost/Nixon”, and in 2012 was cast as the lead in a musical drama entitled “Beautiful Noise”. Jay has appeared on the "Tonight Show" with Legends in Concert, while Leeza Gibbons of “Entertainment Tonight” wrote: “Jay is uncanny and truly amazing!” White is also honored to have performed for First Lady Nancy Reagan, he was a celebrity presenter at the world televised Miss Universe Pageant, received a 2003 “Outstanding Performance Award”, all while rubbing elbows with Hollywood celebrities like Kevin Bacon, William Shatner and James Spader.

White met Diamond on two separate occasions at the MGM in Las Vegas and appeared on his DVD where Neil told Jay to; “Keep up the good work” and then signed a photo of the two, writing: "Jay, keep singing, so I can stay home and relax, your friend in music”. From crowds rushing the stage at casino and corporate events, to 1500 screaming alumni at Princeton Univ., to symphony concerts, or 16,000 passionate fans in his 2 hour Utah "Concert in the Park", White is grateful that his years of dedicated hard work are still so convincing and so appreciated.

His singing career began at age 21 performing in theatrical productions like “Music Man” and “Fiddler on the Roof” as well as a doo-wop group called The Voices. By 1982 he was the lead vocalist for a top 40 band. In 1983 he began performing as Diamond at a Supper Club near his Detroit home, turning an unexpected opportunity into five years of steady work. This led, in 1989, to Las Vegas Producer John Stuart offering him a two month contract as the closing act in the new "Living Legends" show in Reno. Followed then by 9 years and 5014 shows with the world’s #1 tribute show at the Imperial Palace in Las Vegas as their first "living legend”. Jay continues to captivate casino and theatre audiences as “America’s Diamond” in some 4000 extraordinary concerts worldwide, saying; "From dramatic vocals to audience participation, we are committed to creating a memorable exhilarating, emotional experience with every show.”

Over the years, several Diamond family members have even expressed their genuine enthusiasm and amazement. "Their kindness and acceptance have always been greatly appreciated and I’m honored to have appeared with Neil on his DVD entitled Stages.” Occasionally, two of Jay’s talented children perform with him on stage, while his eldest is an accomplished Marine. Apart from the music, his first passion was to play professional hockey. In the 90’s he was the practice goalie for the IHL Las Vegas Thunder, played in several NHL Alumni games, and from 2005-09 Jay dressed in 5 league games for the ECHL Las Vegas Wranglers. Sportscaster Ron Futrell then reported the unique talents of this "Diamond on Ice." Whether a full concert featuring Diamond’s percussionist King Errisson and keyboardist Mark LeVang, playing with a symphony orchestra, acting in feature films, singing the National Anthem at professional sporting events, or staging his new American musical production, this performer has truly become a polished gem.