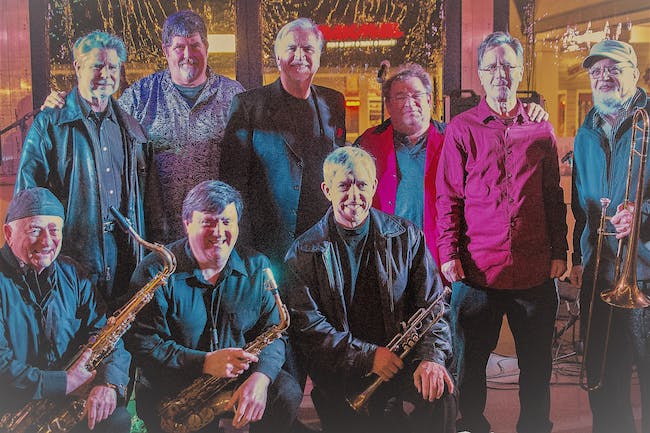 Ron Moody And The Centaurs

Most musical groups, if they ever get off the ground, last a few years and then fade into obscurity. Some, if fortunate, may last several years, but only a very select few perform for decades! Such is the story of Ron Moody and the Centaurs.

Ron Moody and the Centaurs is a 55 year Virginia Tradition with Ron being the only member who has performed at every show since the band's inception December 26, 1964! The group has recorded for Columbia, ABC-Dunhill, and MGM Records, as well as their own in- house labels, Star America and Aron Music. The Centaurs are an 8+ piece Southern Soul / Beach Music Band that has played countless venues over the last 6 decades. In 2008, Ron Moody and the Centaurs were inducted into The Beach Music Hall of Fame

Their story begins in Richmond, VA with five middle school students riding the wave of Motown, Stax, The British Invasion, Elvis, The Beach Boys, Brill Building pop, and all the various genres which comprised the melting pot of ‘60’s American Music. In typical garage band fashion, they learned to play and perform through many days and nights of constant rehearsal. Next they took their “extensive” 10 song repertoire out to the local community center for their first taste of stardom and its accompanying $14 remuneration! It was their start, albeit a humble one, but they never looked back. Soon they had cultivated a large teen following and began to play numerous venues throughout the state. As their reputation grew, they decided to add horns to their lineup and focus on the great Rhythm & Blues that was predominant during the era. This music, now affectionately known as “Beach Music” soon became the band’s passion and the music of choice that remains the bedrock of their repertoire today.

In 1969, The Centaurs decided to record their first single. Hot on the heels of the success of fellow Virginians, Bill Deal and the Rhondels, the band made the trip to Baltimore in March of that year to try their luck. The results were surprising to the entire band. With their very first attempt, the single, “If I Didn’t Have A Dime” was purchased within weeks of recording by Columbia Records and by May it was pressed on their prestigious red label! It was at this time Ron Moody and the Centaurs really began to explode. The band, now in college, performed throughout The Southeast at clubs, fraternities, and arenas, sharing the stage with such legendary acts as The Impressions, The Drifters. Billy Stewart, and Percy Sledge.

By the early 1970’s the band decided to follow a more contemporary road that had been ushered in by the current psychedelic craze. Soul had now morphed into psychedelic soul with new hits from the Temptations like “Cloud Nine” and “Runaway Child” and Sly and the Family Stone. Ron Moody and The Centaurs became “Centaur” and it was during this time that Ron began to take interest and begin to hone his skills as a songwriter.

During this period, the original band began to fragment and go their separate ways. Ron and a few members of the original group packed up and headed south to seek greater opportunities in Atlanta GA. Their Atlanta connection was the great Bill Lowery who was at the time, one of the world’s foremost music publishers. Having started out publishing Gene Vincent’s “Be Bop A Lula” , Lowery by then had such artists and writers as Joe South, Billy Joe Royal, Tommy Roe, The Classics Four, Atlanta Rhythm Section, and The Tams, just to name a few, so there was more than enough inspiration and knowledge to be gleaned from these stars. The band now had a new name, “The New Dixie Line” and was soon signed to MGM South Records, a label owned by Lowery and the young musical genius, Mike Curb. An album was recorded in Birmingham Alabama in the early 1970’s but its promised release on Capitol Records never materialized. Although the album never surfaced, it was during this time that Ron’s passion for songs and songwriters really solidified. Three nights a week the band played an interesting mixture of soul and country in a local club. That blended sound, unusual for its time, was the harbinger of the country music that is commonplace today. Like many musicians, Ron decided a “day job” to fall back on might be a good idea during this time and he got his first gig in marketing and merchandising with ABC/Dunhill Records in Atlanta. After only a short while, Ron’s vocal talents were discovered and a single was released on ABC. The single was the old Charlie Rich hit “Lonely Weekends” b/w the Clifford Curry classic, “She Shot A Hole In My Soul” and the cuts were produced by the legendary Papa Don Schroeder of James & Bobby Purify and Carl Carlton fame.

In the late ‘70’s Ron moved back to Virginia and by the early ‘80’s Ron Moody and the Centaurs reformed. Ron continued to work for ABC, later Polygram, and lastly Universal Music during this time as the sales and marketing rep for Virginia. The band remained constantly busy as well, and if that weren’t enough, he opened up his own recording studio and created his own label known as Star America. In 1987 the band recorded the album, “The Weather’s Here, Wish You Were Beautiful” on Star America and it contains the hit, “The Southeast Corner of the USA”.

Throughout the 80’s and 90’s the band played non-stop and by 2001 it was time for a break. During this couple year hiatus, Ron decided to begin a solo career. His first project, “Southern Style” contained the hit “Timeless” recorded by Paul Craver. Ron’s other solo CD’s “Gon’ Dance” contained songs covered by Archie Bell “Do That Thang Again” and “Motown Here Today” recorded by The Holiday Band. His Christmas CD “Santa’s Coming In A Cadillac” gets phenomenal play every Holiday Season, and Billy Scott has recorded Ron’s Christmas classic, “Closed For The Season”

By 2005, the band was back together and playing as much as ever, but Ron has also maintained his identity as a solo performer and prolific songwriter. His new project, “Lulu’s Chicken Shack” was officially released March 22. The title cut raced up the BeachMusic45 charts and reached # 2 on The National Association of R&B DJs Chart. Also on the new CD is the original version of the song Ron wrote for his friend Paul Craver. Paul has had a huge hit with “Macon, Memphis & Muscle Shoals”

The most recent Ron Moody and the Centaurs projects are 2 “live” CDs recorded in 2018!

Ron Moody and the Centaurs is a musical roller coaster ride through fifty years of Beach, Soul, and Rock & Roll. They still play sold out venues wherever they perform and a night of their music is a non- stop evening of dancing and good times.

As a writer, Ron is among the elite in the Southern Soul / Beach Music World. All of his solo projects, as well as the band’s ’87 CD and their most recent “live” CD’s are available on CD Baby, I Tunes, and all digital sites.