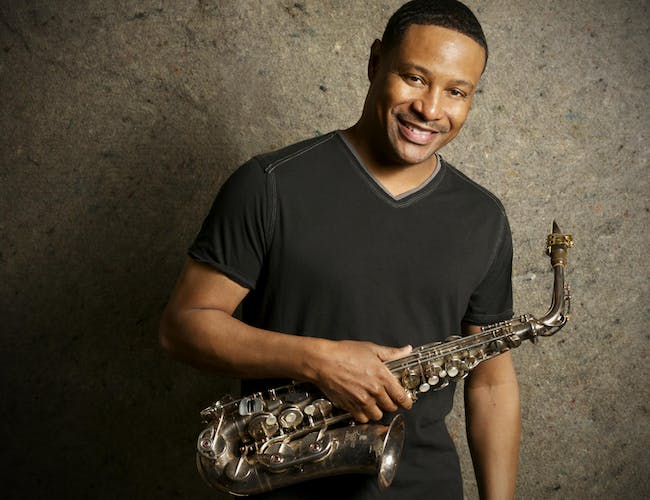 The celebration of a spectacular, constantly expanding career and the family members, both close and extended, who continue to help make it all possible starts off invitingly with DREAMING OF YOU in an up-tempo, melodic groove featuring Kim’s daughter Kayla on keyboards along with her father’s impassioned saxophone stylings. We’re next taken ON A MISSION, another classic Waters creation that brings us to a place where romance rules (as it does on every KIM WATERS album) whenever we can STAY TOGETHER as this quintessential Waters R & B flavored love ballad so eloquently implies and implores.

GO-GO SMOOTH is Kim’s tribute to the legendary Washington, D.C. performer Chuck (“Father of the Go-Go”) Brown, a mentor and friend who has shared many music stages with Kim over the years.

attracted an increasingly loyal following and powerfully interprets ANYTHING YOU NEED, a ballad her husband wrote to express his love for her and deep gratitude for their relationship. The groove then goes up, happy and easy for CRUISING ROUND ROCK, a joyful musical jaunt named for the Texas town where Kim & Dana now have their new home.

A next tribute to a special friend and influence transforms the John Legend hitALL OF ME into an as special and soulful Waters song of praise from Kim to him. Then, another album highlight: the exquisite FIREFLIES, alreadya major hit for the incomparable Disney diva Zendaya - who just happens to be Dana Pope’s niece - and who was so taken by Kim’s concept for this imperishable song, she eagerly agreed to share her extraordinary vocal talents on this jazz-pop version that seems, somehow and most compellingly, even more romantic than the original.

It’s back to basics KIM WATERS-style with LET’S MAKE LOVE and HIGHSTRIDE, a pair of feel-good goodies replete with those mega-contagious hooks Kim is so well known for, before the emotive and adoring A SONG FOR DANA now celebrates Kim’s wife, muse and significant soul mate with a love ballad he feels could be the best of the many he has composed to date.

Returning to an R & B urban groove, SILVER SOUL closes with LAYING BESIDE ME featuring a vocal by another dear friend, co-writer Eric Roberson, in a fitting finale to this brilliantly expressive look back and forward by a master musician and recording artist.

A Baltimore native from a musical family, Kim’s primary influences were jazz icons Duke Ellington, Charlie Parker, Coleman Hawkins, Herbie Hancock, George Benson, Paul Desmond, and Cannonball Adderley. His first instrument - at age 8 - was the violin (“That didn’t go over well with the fellas” says Waters) and within five years he found his true calling on the alto and soprano saxophones. Soon after, Kim organized his first professional band with his brothers, James (who still performs with him) and Eric, and his hometown friend (and soon-to-be jazz piano legend) Cyrus Chestnut. Subsequently, KIM WATERS shared stages with manyof the best including Ray Charles, Al Green, Isaac Hayes, Phyllis Hyman and Grover Washington, Jr. to name a very few. Kim now makes his home in the Austin, Texas area and, when he’s frequently on the road, at the important music venues throughout the world.

SILVER SOUL is a sure bet to please all KIM WATERS fans, earn him innumerable new followers and again affirm his rightful stature as the world’s #1 Urban Jazz saxophonist. Kim once stated, “It has always been my hope that my music in some way brings positivity and enhancement to the world, and in this regard, I firmly believe that people cannot live and evolve without new music - I know I can’t!”