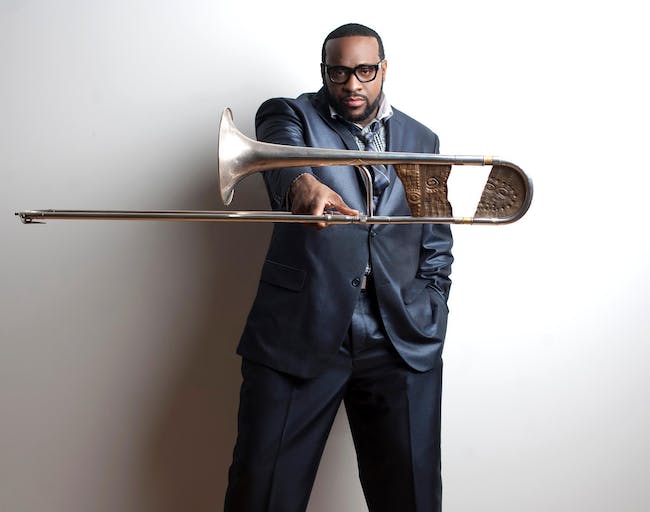 Jeff Bradshaw was born in North Philadelphia. His is father was a minister so his formative musical experiences were in church, where brass bands were a staple. Jeff amazingly never took formal lessons. The first instrument he began playing was the snare drum. Following that he began playing baritone horn and sousaphone. He recalls one life-changing day in high school when everyone was asked to stand in front of the instrument they would like to play. Students crowded around the drums, guitars, saxophones, trumpets, percussion, and woodwinds, but not one person was standing near the stack of trombones in the corner. He choose to play trombone and became determined to make the trombone hip, a cool instrument in mainstream music, not just jazz. After graduation from high school, finances did not permit him to enroll in college so he took a variety of jobs, waiting and hoping for an opportunity to make his mark in music, an opportunity that did not come for seven long years. In 1994, Bradshaw began to meet musicians, singers and producers on the Philly scene he went on to become the architect of the neo-soul revolution: Ahmir ‘?uestlove’ Thompson, Tariq ‘Black Thought’ Trotter of the Roots, James Poyser, Andre Harris, Vidal Davis, DJ Jazzy Jeff, King Britt, Ivan Barrios, Carvin Higgons, and many others. These friendships led to Bradshaw recording with the likes of Erykah Badu, Jill Scott, Floetry, Darius Ricker, Michael Jackson, Earth Wind & Fire, The Roots, Musiq Soulchild and more. Then one night, when playing in a band led by trumpeter Jafar Barron, the leader’s absence afforded Bradshaw the opportunity to step forward and lead the hip-hop soul band. He was well on the way to achieving his goal of making the trombone ‘cool.’

A few years later, Bradshaw was invited by Jill Scott to take part in the recording of her first album and to tour with her after its breakthrough release. This led to a meeting with Hidden Beach Recordings CEO Steve McKeever, who afforded Jeff the opportunity to record his first album as a leader in 2002, BONE DEEP. Bradshaw told Mr. McKeever that they could change people’s perception of what a lead instrument in popular music could be. That acclaimed first album led to busy years of touring, with other artists and on his own, as well as session work with a wide array of hip-hop, R & B and jazz artists. In 2013, Bradshaw released his second album, which was released simultaneously as both a single disc and a double CD set. Most recently, a couple Jeff Bradshaw recordings were included on the soundtrack of the James Brown biopic GET ON UP. All of that was simply preparation for HOME, Jeff Bradshaw’s ultimate musical statement.