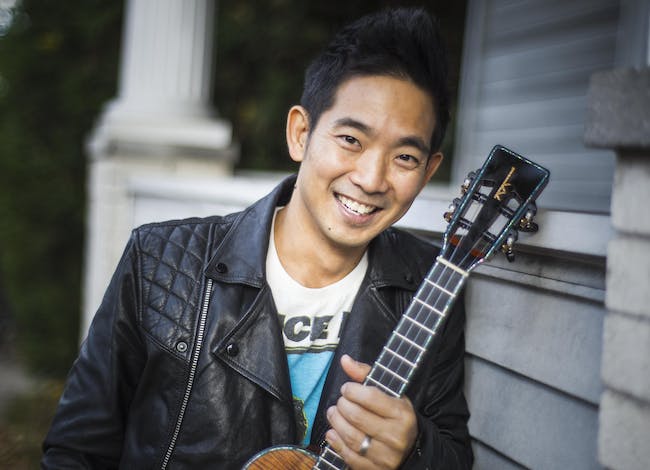 Jake Shimabukuro can still vividly remember the first time he held a ukulele, at age four. It was an encounter that would shape his destiny and give the world one of the most exceptional and innovative uke players in the history of the instrument—an artist who has drawn comparisons to musical titans such as Jimi Hendrix and Miles Davis.

“My mom played, and I kept bugging her to teach me,” he recalls. “So one day we sat down on the floor and she put her old Kamaka ukulele in my hands. I remember being so nervous. Then she showed me how to strum the strings and taught me my first chord. I fell in love with the ukulele immediately. From that day on, you had to pry the instrument away from me in order to get me to do anything else.”

That first brush with musical fate took place in Honolulu, Hawai’i, where Jake was born and still makes his home. Growing up, he studied and played a number of other musical instruments—drums, piano and guitar. “But none of those instruments spoke to me the way the ukulele did,” he says. “There was something about the uke that was different. Music was my passion, but I had no idea that I could make it as a musician. I always thought that maybe I’d be a school teacher and incorporate music into the classroom, rather than being on a stage performing in front of people.”

Of course, Shimabukuro would end up performing on many of the world’s most renowned stages. Starting his career in Hawai’i, he took his inspiration from some of the islands’ great uke players—Eddie Kamae, Ohta-San and Peter Moon. But he quickly expanded his scope from there, drawing influences from across the musical spectrum.

“As I got older,” he says, “I realized that I could also learn from guitar players, drummers, violinists, pianists, singers and even dancers. And then I started to observe athletes. Athletes are artists too. I was heavily influenced by people like Bruce Lee and Michael Jordan – applying their philosophy and intense, mental focus to music performance.”

As a member of the group Pure Heart, Shimabukuro became a local phenomenon. From Hawai’i, his fame next spread to Japan. He was signed to Epic Records (Sony/Japan) in 2001 as a solo artist. It was the start of what would become a deep catalog of solo albums, noted for their dazzling fretwork, ambitious repertoire and wistful melodicism. And in 2005, Shimabukuro became an international phenomenon when a video of him performing the George Harrison song “While My Guitar Gently Weeps” went viral on YouTube.

“At the time, I didn’t even know what YouTube was,” Jake laughs. “Nobody did, especially in Hawai’i. But I had some friends who were going to college on the mainland and they sent me a link to the video. By the time I saw it, it already had millions of views. My name wasn’t even on it then. All it said was ‘Asian guy shreds on ukulele,’ or something like that. That’s what opened up the doors to touring in North America, Europe, Asia and beyond. It was a big turning point for me.”

By adapting a guitar hero anthem for the ukulele (Eric Clapton had played lead guitar on the Beatles’ original recording) Shimabukuro made a significant statement: The ukulele, with its humble four strings and modest two-octave range, is an instrument limited only by the imagination and creativity of the person playing it. Along with his own original compositions, Jake became noted for his solo uke arrangements of such varied pieces as Queen’s “Bohemian Rhapsody,” Schubert’s “Ave Maria” and Leonard Cohen’s “Hallelujah.”

“A lot of those are just songs that I really love,” he says. “I’d sit at home and work out how to play some of them on the ukulele. A lot of it is for my own curiosity. I always wondered, ‘Man, what would “Bohemian Rhapsody” sound like on a ukulele?’ And then it’s my stubborn nature not to give up until I’d figured out how to do it.”

Shimabukuro’s busy touring schedule—140 dates a year—is complemented by a rich and varied catalog of albums that capture the many moods of the uke. His most recent CD, Nashville Sessions, is one of his most adventurous, multifaceted and engaging records to date, blending elements of jazz virtuosity with heartfelt melodicism.

A husband and father of two, Jake balances his stellar career with

family life and community service. He travels to schools around the world spreading positive messages to young people, encouraging them to live drug free and find their passion—just as he did at age four when his mother gave him his first ukulele lesson. In the time since then, he has played a key role in the current revival of interest in the ukulele.

“When I first started touring the mainland,” he recalls, “everybody would say, ‘Oh man, I didn’t know you could play that kind of music on that thing.’ But now there are so many iconic artists playing the ukulele, like Paul McCartney, Eddie Vedder, Train, Jimmy Buffett, Michael McDonald, Dave Mathews and Taylor Swift. Even popular cartoons like ‘Peg + Cat’ and ‘SpongeBob SquarePants’ have ukulele soundtracks. The popularity of the ukulele keeps growing every year. And I’m constantly discovering new sounds, styles and expressive possibilities within the instrument through projects like the Nashville Sessions album. By the time we finished that recording, I already had tons of ideas for the next album. I can’t wait to get back into the studio and experiment some more.”