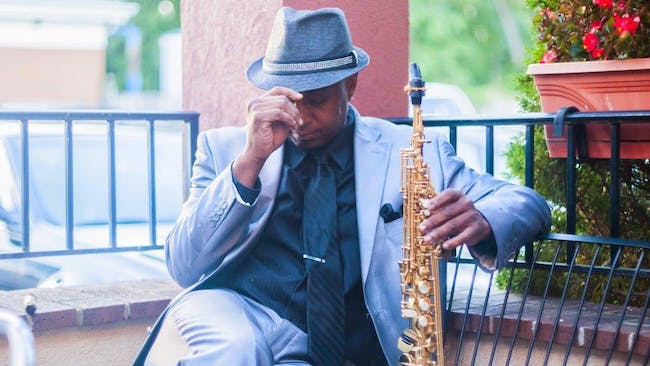 Geno Marriott is an American jazz musician, producer, and entrepreneur. Known in music circles as “GMusic”, he is the Director/Owner of GMusic Entertainment, LLC, the home of the popular Washington, DC area jazz group “The Spirit of Jazz.” His company manages several bands and musicians on the east coast, including gospel, country, R&B, jazz, and classic rock groups.

Geno Marriott was born in Philadelphia, Pa., but his family moved to the Raleigh, North Carolina area in a small community called,”Riley Hill”, when he was 4 years old, for what his father called a “reboot in life.” One day after his little league football practice, his parents bought him an alto saxophone. He wanted to play trumpet but his mother said, “I like the way the saxophone looks better.” Well from that very moment Geno studied and played music in his room then onto, Wendell Elementary School then to East Wake High School and then eventually in college at Howard University. He left his studies in music to early,to… “make money” in the Information Technology Industry. For nearly two decades, Mr. Marriott worked to “make money”, but he was not fulfilling his real dream of performing music. After years of soul searching and experiencing the ups and downs of life, Geno knew that music was his saving station in life. He purchased a saxophone in 2009 and practiced until he could blow a note or two. He first gig was for $45 dollars in Baltimore, MD. He was happy that someone paid him to do what he loved to do! Over the next few years he performed with other musicians and bands trying to find his niche in the music industry. In 2015 Geno met Kevin Carter, Tony Brown, Patrick Clark and Ralph “Bubbie” Jackson. This group became known as “The Spirit of Jazz.” The Spirit of Jazz began performing for private events, small and large across the region starting in Washington, DC, Hampton,Va., Philadelphia, Pa,The Carolinas ,Atlanta, Florida and New York City. They performed for an entire summer in 2017 in Manhattan inside of the Historic Flat Iron Hotel.

The Spirit of Jazz has grown, they have opened up for and shared the the same stage with Smooth Jazz Artist: Dove Koz,Boney James, Marcus Johnson, Marcus Anderson,Jonathan Butler, Candi Daulpher,Julian Vaughn, Paul Taylor, Jaheim Joyner, and Bill Medley from The Righteous Brothers (“You Lost That Loving Feeling”). Geno has also shared the stage with Gospel Greats: Byron Cage and Marvin Sapp. Geno Marriott & the Spirit of Jazz have been the headliners for the past two years for the Hampton Jazz Festival Kick Off in Hampton, Virginia. In November 2019, Geno and his band opened at The Hampton,Roads Convention Century for the 7th Annual Jazz Legacy Foundation which featured Musical Greats Gerald Albright, Peabo Bryson, Trombone Shorty, Maysa and others. He is grateful to have come this far!

Mr. Marriott has two CD projects under his belt, “The Spirit of Jazz” and “Shades and Shadows.” He returns back to the studio in early 2020 for his next project “Smell the Roses”