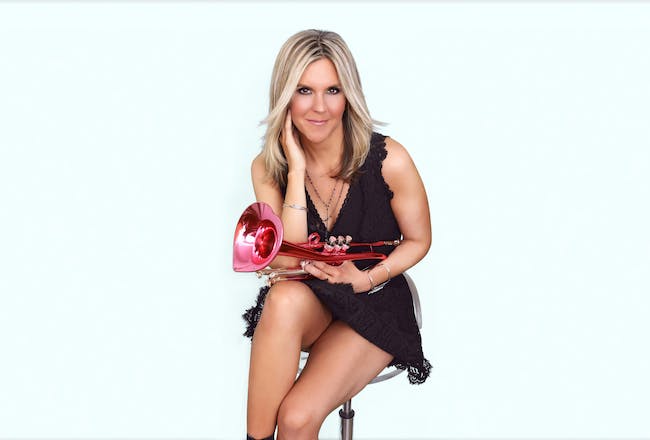 With the release of Unscripted, her latest Trippin’ N Rhythm recording, Cindy Bradley is not only keeping the trumpet and flugelhorn hip and grooving lead jazz instruments like her late great heroes Freddie Hubbard, Lee Morgan and Blue Mitchell--she’s also continues her knack for picking spot on album titles.

Calling her 2009 debut Bloom proved prophetic, as the multi-talented performer blossomed into a powerful and charismatic presence at radio and on the contemporary jazz festival circuit. Along the way, Cindy performed everywhere from the River Raisin’ Jazz Festival in Monroe, Michigan to the Dubai Jazz Fest. She won Best New Artist at the American Smooth Jazz Awards and was named Debut Artist of the Year by the Catalina Island Jazz Trax Festival and Smooth Jazz News. How to follow up? Easy. Don’t over-think or worry about everyone’s great expectations. Like a lot of the most exciting moments in life, it’s sometimes just best to go Unscripted—the perfect moniker for the whimsical spirit and stylistic diversity that drives Cindy’s new album.

For the NYC area based Cindy, collaborating on Bloom with Grammy winning producer Michael Broening (George Benson, Wayman Tisdale, Marion Meadows, Steve Oliver) in his Phoenix studio proved to be a stroke of creative genius. The collection was an incredible showcase for her multitude of talents as a player, which extend from traditional jazz and hard bop to R&B and pop influenced contemporary jazz. For those sessions, Broening had laid out a lot of tracks in advance for Cindy to co-write to and work her horn magic over. Wanting the new project to reflect her artistic growth since the first album and a deeper sense of her true emotions, Broening insisted this time in essentially winging it. He invited her to his Phoenix studio without any prescribed agenda.

Cindy shared with the producer a lot of what she had been going through behind the scenes even as her solo career was taking her to new heights and connecting her with fans all over the world. Within a span of a few months, she ended a romantic relationship and both her grandmother and mother (and admitted best friend) Doreen were diagnosed with cancer; her grandmother has since passed away but Doreen has had clear scans and is doing well now. What started out as essentially Unscripted sessions ultimately became a wonderfully cathartic experience.

“Michael is so good at getting in my head to see where I’m at when we work together,” says Cindy. “He knew I was going through a lot and that this would lead to me writing a lot more than I did on the first album. He really did a lot to get the best songs and performances out of me. It was a unique creative process because we essentially wrote as we went along, and it evolved into a longer, deeper process. Ultimately, I feel that Unscripted is more ‘me’ than anything I had recorded before. It was completely my vision of what I wanted to play.”

“Including ‘You Don’t Know What Love Is’ and ‘Footprints’ was a way to further explore my roots in straight ahead jazz and infuse more of my background into the mix. Considering that Mindy Smith wrote the song ‘A Moment More’ for her mom who was dying of cancer, concluding the album with a cover of it seemed very appropriate. At first I was a bit afraid flying out to work with Michael with nothing prepared beforehand. But ultimately that was the point, because an amazing concept took shape and the end result was more magical than I could have imagined. Music kept me going through these scary times in my personal life, and as a result, Unscripted is a much more intimate and powerful experience.”

The overriding theme that takes shape finds Cindy on a mind clearing, soul-lifting stroll through the hustle, bustle and multiple shades of dance music and jazz found in New York City. The moody, atmospheric opening “Prelude” includes sounds of high heels hitting the pavement and a cab door closing as the trumpeter begins her evening’s adventure. On the brisk, percussive “Mass Transit,” she enters a club and is immediately inspired by the thumping retro soul funk beat to pick up her trumpet and soar along. Then she gets back in the car (“Interlude”) and heads off to a trad jazz club, where she engages in a dreamy, easy rolling take on “Footprints” and an elegant and lush, film score flavored vibe on “You Don’t Know What Love Is.” Afterwards, she heads to a contemporary jazz-friendly spot for the seductive, in the pocket (and yes, optimistic!) flugelhorn driven “Lifted” and “A New Day.”

The next “Interlude” features some heavy radio station flipping to get Cindy into the next musical headspace—which winds up being the fiery and festive, brass-intense celebration “Déjà Blue,” whose grooving funk opens the door for her to explode on trumpet and trombone alongside saxman Tim Veeder. The fun continues—also led by her trumpet and trombone mix—on the high octane horn jam “Pink Slip,” which features Broening adding a deep and bluesy Hammond B-3 texture to the mix. Cindy’s evening winds down with the sensual and sexy flugelhorn ballad “Inevitable,” a flugelhorn solo “Interlude” and the haunting reflective “One Moment More,” which closes Unscripted with a burst of powerful emotions that puts life in its proper perspective.

A native of Buffalo, New York, Cindy loves telling the story of how she became a trumpet player by accident in fourth grade: “I started playing the piano when I was six, but we had to choose a different instrument to be part of the band program. I forgot to bring my permission slip to class, so the teacher just had me randomly circle an instrument that I wanted to play. I picked the trumpet, which turned out to be a life and career defining fluke.” By 12, she was performing professionally with “Sugar and Jazz,” a Buffalo area jazz band that consisted of promising musicians, ages 12-17, which emulated the big bands of the 1940s. Cindy played with many jazz groups during her formative years, but it was with this group that she fell in love with performance, jazz, and especially the trumpet.

After earning a bachelor’s degree in jazz studies from Ithaca College, she went to the New England Conservatory to study for her master’s in jazz trumpet performance; at the conservatory, she studied with and was influenced by many jazz greats including John McNeil, Bob Brookmeyer, Jerry Bergonzi, George Russell and Steve Lacy. After earning her degrees, Cindy immediately headed to the New York City area and immersed herself in the vibrant jazz scene, discovering equal passions for straight ahead be-bop and contemporary jazz, as well as funk, Top 40, R&B and jazz fusion. The bands she was involved with played clubs as well as high profile events like the Emmy Awards and even the Super Bowl.

Cindy has also applied her skills and background in a way to inspire future generations. She has conducted hundreds of jazz workshops at high schools and colleges all over the country. “These workshops are a way of giving back to the community,” she says. “It’s inspiring just to see the influence a few encouraging words can have on young people who really want to develop their passion for music. It’s amazing to realize that a lot of the younger kids I teach have never seen anyone play a live wind instrument before their eyes!”

Cindy has impressed thousands of jazz loving adults as well over the years, touring with legendary urban jazz group Pieces of a Dream, performing in NYC with the Sly Geralds Band (bassist for Maceo Parker) and—since the release of Bloom—playing such renowned events as the Big Bear Lake Jazz Festival, Omaha’s Riverfront Jazz and Blues Festival, the Balcones Heights Jazz Festival in San Antonio and the North Carolina Wine and Jazz Festival.

“It took me a some time to find my voice as a solo artist on trumpet and flugelhorn,” says Cindy, “but it’s been an exciting learning process and I have had so much fun along the way meeting so many great people and being able to play for audiences who love all styles of music. The title Unscripted certainly applies to the way Michael Broening and I went about making this album, but in a larger sense, it’s about the reality of life. Life has no script and you never know how it’s going to go as we experience its ups and downs. Working on this project was definitely a way to keep things up after going through a challenging emotional time.”