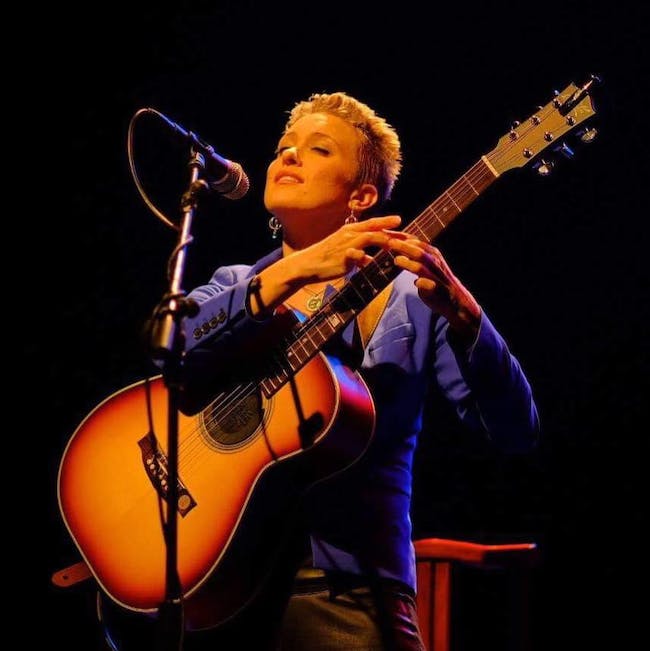 2017 International Fingerstyle Guitar Champion “Christie Lenée” is a captivating performer with a devoted following among instrumental, folk-pop and rock band audiences. Combining guitar mastery, contemporary singer/songwriter and a passion for storytelling, she thrives on bringing people together through the language of music.

Christie’s unique guitar work and profound instrumental compositions are well described as ‘Michael Hedges meets Joni Mitchell and Dave Matthews.’ Among the vast community of fingerstyle and tapping guitarists, her niche is the integration of melodic pop lyricism with catchy hooks that excite both modern commercial listeners and classic purists. With a menu of percussive and sonic effects, and

larger than life sounding instruments, her solo shows embody layers of orchestral elements with a wide array of dynamics and harmonic textures.

Christie’s pieces have been showcased at the NAMM Show in Anaheim and Nashville, live on National Television and Radio, and on stage with artists such as Tim Reynolds (guitarist for Dave Matthews Band), Andy McKee, Tommy Emmanuel, Amy Ray from the Indigo Girls, and Stanley Jordan to name a few. Her most recent album “STAY” was one of three finalists for “Best CD of 2016” (Indie Acoustic Project Awards), including the song “Love Who You Are” nominated for a 2016 Posi Award in the category “Songs for Personal Transformation.”

Christie spent most of 2017 on tour in the US, Australia, and many countries around Asia. She’s now back in the studio recording new songs, intentionally crafted to weave her compositional guitar wizardry with folk-pop lyricism and ever exceeding vocal performances. The first three singles on deck, "Free World Citizen," "Call My Heart Back

Meanwhile her album “STAY” is still making traction, including 3 instrumental pieces produced by Grammy Award Winning Producer Will Ackerman (founder of Windham Hill Records). These glorious instrumental pieces vary, from “Soaring Over Glacier Bay” with 27 cellos and a symphonic essence, to “Sunset Rebirth” with a bamboo flute, and the

Christie's first place acclaim in the International Fingerstyle Guitar Championship in September of 2017 has continued to keep her travels fluent. The naturally born composer/performer has a deep love of music that transcends through every stage, into the hearts of listeners, leaving crowds entranced with harmonic eloquence and

emotionally moving songs. Her story continues to unfold with velocity and accomplishment!

“Christie Lenée is a wonderful spirit making beautiful music on the guitar. She has epic compositions that take one on a journey through time.”

“Christie Lenée is a very creative and skilled musician!”

“The message in the music of Christie Lenée is crystal-clear and unambiguous. And that message is a celebration of life, love and joy. The elation in her voice, the ever-present

smile on her face, her warm and embracing lyrics, her wonderful between-songs anecdotes, and her brilliant guitar playing all point directly to that message.”